The evolving role of the CIO

When Google CIO Ben Fried talks about his job, he gets fairly animated. “I’ve been in IT 30-something years,” he said at Atmosphere Live. “I can’t remember a time when there was so much change happening at such a rapid pace in so many parts of the technology landscape. Mobile, data, the cloud — these and ten other technologies are all moving at incredible speed.”

What should every CIO understand about today’s IT?

The pace of change for IT is driven by employee demand for consumer technologies, combined with the opportunities they present for business transformation. Fried makes the point that we can’t rely on the old change management cycles. Skilled tech support people, who understand how to roll out new technology at the speed the tech industry delivers it, are incredibly important. If you can’t move at the pace of change, after all, you’ll always lag behind.

While some CIOs may still fear the intrusion of personal devices and cloud apps into the workplace, Fried sees it differently. Technology advancements in the consumer space, he says, offer infrastructure and development platforms that give business transformation a major head start, so it can happen at a much lower cost. Now “We don’t have to write the checks that pay for the R&D and the innovation that’s creating these technologies” says Fried.

Rather than trying to master every aspect of IT, Fried encourages CIOs to focus on solutions that can really make a difference for their businesses—creating customized, enterprise-ready software that builds on consumer technologies.

Most of your people use the cloud already. You can help them end the confusion caused by using an enterprise tool set that’s completely divergent from the personal tools they know and love.

A couple of years ago, Fried noticed the company was spending a lot of money on outsourced videoconferencing systems, but they owned all the technology in-house—so he asked Google engineers to build an in-house system. The new system was so successful internally that customers who visited began asking about it, and Chromebox for meetings was born.

If you’d told me before I took this job that I’d be presiding over 9,000 in-house videoconferencing systems, I would have said, ‘What? That’s the CIO’s job?’ But actually, it’s an amazing source of innovation for us and a real point of pride for the company. 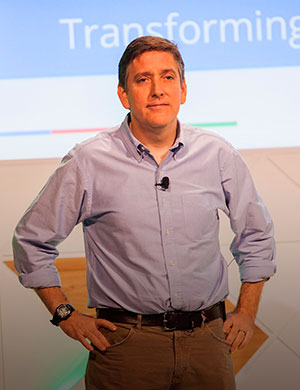 What are the big challenges for CIOs?

In this period of history, the pace of change continues to increase. “Two guys in a bedroom can build an app that will be used by a million people the next day. That’s incredibly fast.”

Keeping up with that pace requires being open to cloud computing. For IT leaders still hesitant to make the shift, Fried makes two points. “First, it’s not as hard as you may think, most of your people use the cloud already. You can help them end the confusion caused by using an enterprise tool set that’s completely divergent from the personal tools they know and love.”

The second point? “In the end it’ll make your company better,” Fried says.

Moving problems to the cloud means moving them out of your mind, it lets you deliver way more in the areas that are much more important for your business than these problems that can be solved in the cloud.

For Fried, that means more time to think about “differentiating Google, making Google a great place to work and making Googlers the most productive people in the world.”

That’s how Google defines innovation, but each business is different. To create a culture that supports innovation and get a handle on your evolving CIO role, says Fried, you have to decide what it means with your team and move forward from there.

The evolving role of the CIO. A Google Cloud collection.